Arsenal striker Olivier Giroud scored his 14th Premier League goal of the season against Liverpool despite missing three months of the season with a broken ankle which he suffered in August against Everton.

The Frenchman’s return has been remarkable and given his limited appearances, his goal-to-game ratio looks rather healthy when compared to his rivals in the Premier League.

Consistently criticised, Giroud was reproached for his inability to score in the big games, but those claims have since been answered with goals against Manchester United, Manchester City and Liverpool twice. 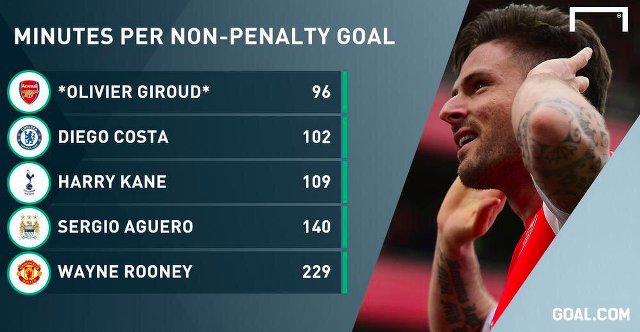 Should he keep up the form he has shown in 2015, Giroud may make a late charge and claim the golden boot in the Premier League. According to Goal.com, the former Montpellier man leads the charts in terms of goal ratio when you exclude penalties. The likes of Wayne Rooney and Sergio Aguero are the regular penalty takers for their clubs which shows the power of Giroud’s efficiency in open play.