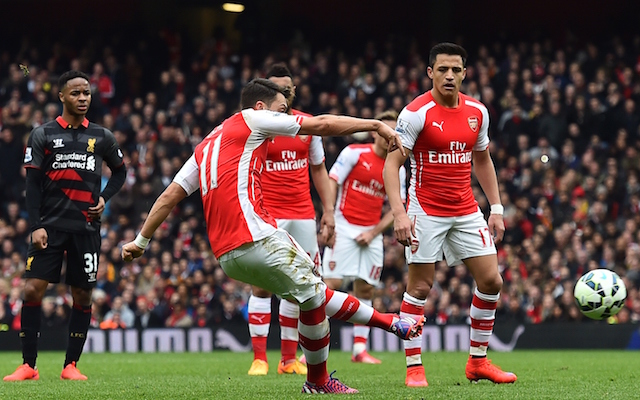 Arsenal are one of the many clubs to be linked with a move for Liverpool contract rebel Raheem Sterling. Although reports state that Arsene Wenger is ruling his club out of the running, the speculation seems unlikely to die down while the 20-year-old’s contract at Anfield remains unsigned.

But really, why should it? Arsenal’s stunning attacking display to thrash the Reds 4-1 yesterday clearly shows that they are not in need of new attacking players. At their best, Wenger’s side play some wonderful football and have options all over the pitch – as perfectly illustrated by their four goals coming from four different players, including the excellent attacking right-back Hector Bellerin who, funnily enough, would probably be a far better player than Sterling in Brendan Rodgers’ 3-4-3 formation with wing-backs.

Elsewhere, Mesut Ozil, Alexis Sanchez and Olivier Giroud completed this masterclass in free-flowing football, all with an end product that has so often been lacking from Arsenal sides of old, while superb midfielders such as Aaron Ramsey and Santi Cazorla pulled the strings. In all of this, there was no room even for big names like Danny Welbeck, Theo Walcott, Tomas Rosicky or injured midfielder Jack Wilshere, all of whom could have a strong claim for a starting place in most games.

How on earth could Sterling – who was anonymous at the Emirates Stadium on Saturday – fit in to all of this? Although he is certainly a fine young talent, it’s hard to imagine him getting in ahead of any of Arsenal’s starting players yesterday on a regular basis. It is even harder, then, to imagine that the financially frugal Wenger would fork out £50m or whatever ludicrious fee it would take to sign him – £8m more than Ozil cost, £15m more than Sanchez and an incredible £35m more than Cazorla, one of the best all-round attacking midfielders in the Premier League this season. And they say English players are overpriced…

Indeed after days like yesterday it is worth wondering if Arsenal need any improvements upfront at all. So much of how Wenger’s teams play is dependant on the fine understanding of each others’ games, which is improving all the time as these class acts get used to each other. It is debatable if there are any worthwhile options out there in the transfer market, and even then, is it worth breaking up this superb side that has formed in the last few months?