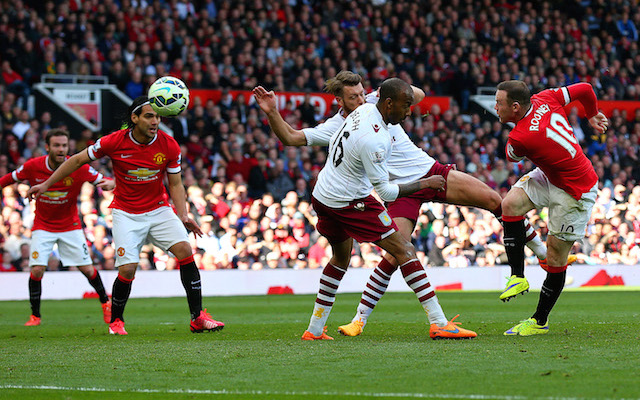 The Red Devils are now one point ahead of City, though they have played a game more, after a 3-1 victory over Aston Villa at Old Trafford.

With Arsenal’s earlier 4-1 thrashing of Liverpool, United are now eight points clear of the chasing pack of Champions League hopefuls with only seven games remaining in their season.

“It was a fantastic strike,” said van Gaal about Rooney’s impressive second-half goal (visible at the bottom of the article), according to the Daily Express.

“And he also made an assist for another goal. It was a great result for us.

“Now we have a gap between us and the teams below the top four, and we have to fight against Manchester City next weekend for a place higher in the table. I hope we play ugly and win.

“Nothing is settled in the league yet so I am looking higher.”

Chelsea, meanwhile, sit seven points clear of second-placed Arsenal who themselves are just one point better off than United after a 2-1 win for Jose Mourinho’s side over Stoke City.

But despite their dominant position, van Gaal is refusing to concede the title to the Blues just yet.

“In a normal season Chelsea would win the title but we are putting pressure on through our results – and so are Arsenal. Anything is possible at the moment.”