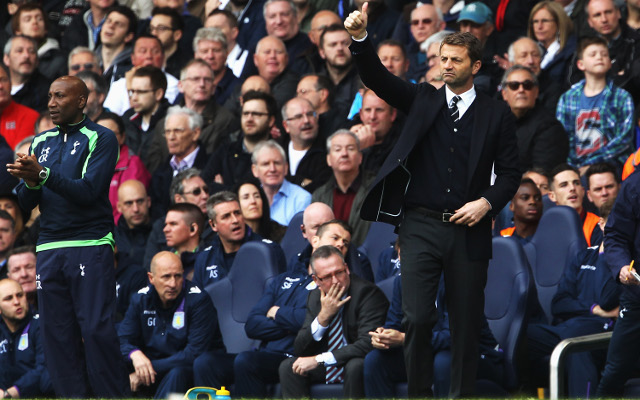 In the Premier League’s only midweek game, QPR will travel to Villa Park hoping to dump their opponents further into the relegation mire, whilst taking themselves – albeit temporarily – out of danger.

The fixture will bring together two managers that found themselves thrown in their respective dugouts in difficult circumstances earlier in the campaign, and tasked with just one objective – to keep their clubs in the top flight.

As well as their short-term mission, both men have another thing in common, for they were part of the coaching staff at Tottenham together not so long ago.

Aston Villa manager Tim Sherwood – who was promoted to the head coach role at White Hart Lane after Andre Villas-Boas’s sacking – and Queens Park Rangers boss Chris Ramsey have both previously spoken of their admiration for one another, but they will have to put their friendship aside ahead of Tuesday’s massive clash between their two sides.

And it is not just the game itself that will see an unfamiliar frost between the pair. The Daily Mail has reported that Sherwood has already started giving his former colleague the cold shoulder, by rejecting his calls.

“I haven’t spoke to Chris for a while. I keep red buttoning him. Have I text him to say well done [over the QPR result]? No,” he explained.

Whoever wins the game could have a huge upper hand in the battle to keep their heads above water, and stay in the division come the end of the season. The former Blackburn captain has revealed that in an ideal world, neither club will be in trouble when all is said and done, but conceded that that was unlikely.

“I hope we both survive. It’s more likely we will than them because after Tuesday night we could be six points ahead.,” he added.