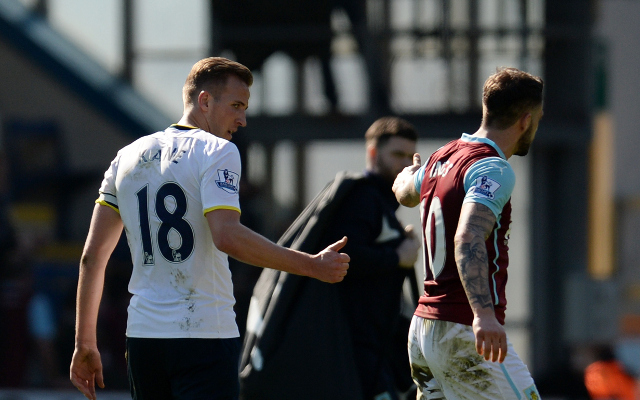 Tottenham striker Harry Kane’s international career may be just a little over one cap old, but the 21-year-old has already revealed the man he believes he could form a lethal partnership with for the Three Lions.

The Premier League’s joint leading goalscorer crowned a scarcely believable season by making his full England debut in the last European Championship qualifier against Lithuania at Wembley. The Spurs forward scored the final goal in the 4-0 win just moments after coming on.

In the friendly with Italy days later, Kane was rewarded once again, this time by making his first start.

From his two caps, he has already featured alongside captain Wayne Rooney, Raheem Sterling, Theo Walcott, and Danny Welbeck in attack. However, it is another name lighting up the Premier League this season that he believes may become a long-term fixture for Roy Hodgson’s men – Burnley striker, Danny Ings.

The pair have played alongside each other for the under-21’s, and are expected to be lead the line together in the summer’s European Championship for Gareth Southgate’s side, and according to The Sun, Kane suggested that the partnership could make the step up in the future.

“We’ve both got to keep working hard, as do all the other strikers, but Danny is a real prospect for the England team.

“There is a lot of competition so we’ll see what happens,” he explained.