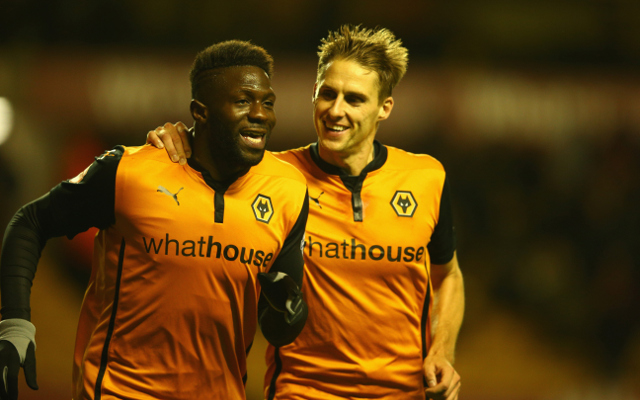 Wolves moved back into the Championship play-off positions with just five games to go, after Dave Edwards’s late header helped Kenny Jackett’s side overcome Leeds, but only after they had blown a two-goal lead at Molineux.

Neil Redfearn remained in the dugout for the game, despite questions lingering over his future with the Yorkshire club, but he would not have been pleased with the scrappy start made by his players. Nevertheless, it was his side that took a surprise lead.

Academy graduate, Charlie Taylor cashed in, after Kevin McDonald’s attempted clearance cannoned off teammate Richard Stearman, and into the 21-year-old’s path. He had the simple task of tucking the ball past Carl Ikeme from six yards out.

But the home side needed only eight minutes to level things up. Nouha Dicko managed to squeeze home from an incredibly acute angle after an exciting move put the Leeds defence under pressure.

After a fairly disappointing first half, you would imagine Redfearn was looking forward to getting his team in at half-time whilst they were level, and reminding them of the excellent football they had played to take them away from the relegation zone. However, Dicko forced a change of plan.

The 22-year-old bagged his twelfth goal of the season moments before the interval with a smashing effort. Questions however, could be asked of Whites goalkeeper, Marco Silvestri, who left his near post largely unguarded.

It appeared that the game was over when former Arsenal youngster Benik Afobe added a third three minutes into the second half. After the 3-0 defeat to Blackburn last time out – as well the recent off-field issues – it appeared Leeds’s awful week was about to be prolonged.

But they were provided with a glimmer of hope, when Wolves skipper, Danny Batth stabbed the ball past Ikeme from an Alex Mowatt cross just after the hour mark.

And it was Mowatt who then levelled the game with just over fifteen minutes to go with the best goal of the match. The midfielder curled a wonderful effort from outside the box, and somehow Leeds were level, and looking like they may steal a point.

But it was cruelly not to be, as McDonald atoned for his error for the Taylor goal with a dangerous cross that found Edwards. The midfielder leapt and placed an exquisite header into the top corner, sending Jackett’s men back into the top six.