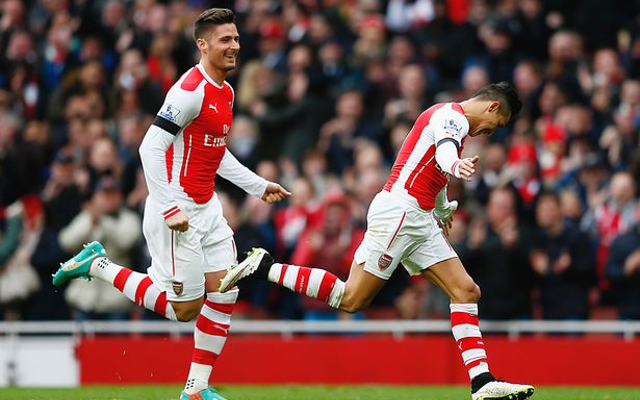 Arsenal stars Alexis Sanchez and Olivier Giroud are tied on 14 Premier League goals for the season after excellent performances from both throughout the 2014/15 season, but it is the latter who looks like he could make a late charge for the Premier League Golden Boot.

An Arsenal player has not won the award since Robin van Persie in 2012, but Giroud’s recent magneficent form and confidence makes him look unplayable at the moment, and he is now just five goals behind current top scoring duo Diego Costa and Harry Kane.

Of course, these two players have been unstoppable themselves in front of goal this season and will be hard to peg back, but Costa’s injury worries at Chelsea could see him miss a large chunk of the end of the season, while he clearly hasn’t been at his very best since struggling with various knocks. It won’t be enough to stop the Blues winning the title, but it may mean the Spaniard doesn’t claim the prize he looked destined to win comfortably after his flying start to the 2014/15 season.

Kane, meanwhile, remains something of an unknown quantity; out of nowhere, the 21-year-old has become one of the most deadly finishers in England and his confidence has been sky-high. Still, Spurs look jaded after a long season and with little to play for now as a top four spot looks impossible. Kane was one of many quiet Tottenham stars in their 0-0 draw with Burnley and one feels the whole team could lose that momentum that was giving the youngster so many opportunities to add to his immense tally.

Suddenly a five-goal gap doesn’t look too much for Giroud to exploit, with the Frenchman likely to relish a fairly generous fixture list in the closing matches of the campaign as Arsenal hope to provide Chelsea at least a little scare in the title race, whilst also aiming for a second-place finish which would be their highest in ten years. With the FA Cup also to play for, the Gunners won’t want to slip up as previous seasons have shown that they are very much a momentum team who need to be firing on all cylinders to approach the more meaningful games with the kind of confidence that can see them play the kind of football that blew Liverpool apart this weekend.

It may be unwise to rule out Sanchez as well, with the Chilean on the same tally as his team-mate at the moment, but on current form it really looks like Giroud could be the surprise Golden Boot winner this season – a feat that may finally convince some doubters that he’s a decent player.