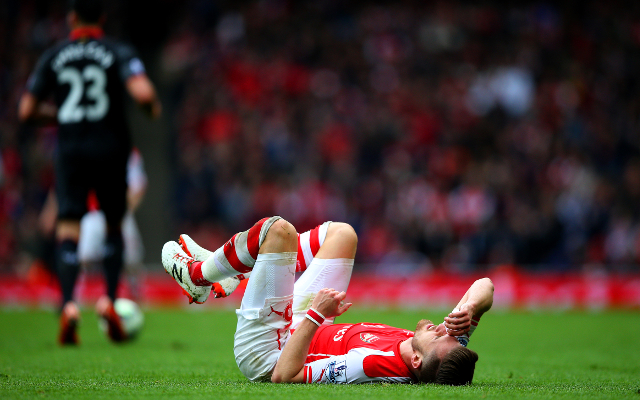 Arsenal have been boosted by the news that in-form midfielder Aaron Ramsey will be fit for their game against relegation threatened Burnley at the weekend according to Injury Data Analyst Ben Dinnery, who has revealed the news via Twitter.

Ramsey limped off in the 4-1 win against Liverpool at the weekend, but it appears the substitution was just a precaution and the Welsh midfielder, who has scored three goals in his last five appearances for club and country, will be available for selection ahead of the game on Saturday evening.

There was an update on midfielder Alex Oxlade-Chamberlain, who has missed the last four games for the Gunners and the double-header with the England national team, after picking up a hamstring problem against Manchester United last month.

Just received a few updates from #AFC ahead of this weekends’ trip to Turf Moor Ramsey – fine, no issues Ox – another couple of weeks

Dinnery has also revealed that centre-back Laurent Koscielny, who had to be replaced early in the second half at the Emirates, is doubtful for the trip to Turf Moor along with Polish goalkeeper Wojciech Szczesny who missed the game last Saturday altogether with a rib injury.