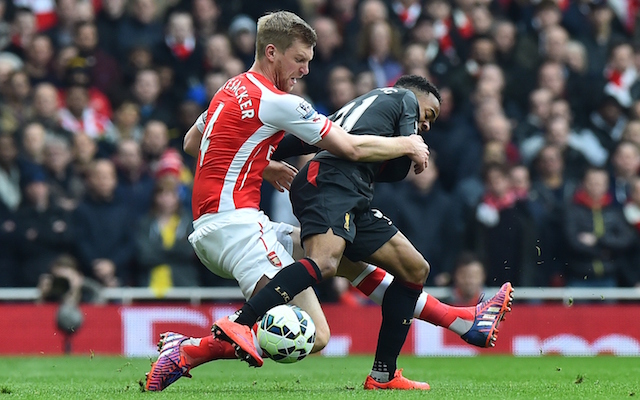 Arsenal vice-captain Per Mertesacker has put the club’s revitalised form in 2015 down to the belief within the camp to turn their fortunes around after the Gunners won their seventh consecutive Premier League game on Saturday, the defender told Arsenal Player.

Arsene Wenger’s men thrashed rivals Liverpool 4-1 at the Emirates Stadium to send a warning to league leaders Chelsea, but their early season form will inevitably mean they will probably fall short of the title.

Defeats to Swansea and Stoke City put immense strain on Wenger and following the debacle at St Mary’s on New Years Day, it seems as though there has been an internal desire at the club to turn their season around.

That has since been achieved, but Mertesacker revealed that it required the whole club to dig deep and tap into their “inner-core”.

“I am delighted with how the team responded to the criticism that came our way because it is a completely new experience for a lot of players to have post-World Cup difficulties,” Mertesacker reflected.

“But the belief and trust of the manager and the inner core of the club has been absolutely amazing. This means more to me than what happened in the first few months with the lack of form and the criticism.”

Mertesacker himself was singled out for criticism on a number of occasions, but since resuming his partnership with Laurent Koscielny at the heart of the defence, the two have stabilised Arsenal’s rearguard.

After an intense few months, the World Cup winner will definitely want to sign off the season with another FA Cup trophy.