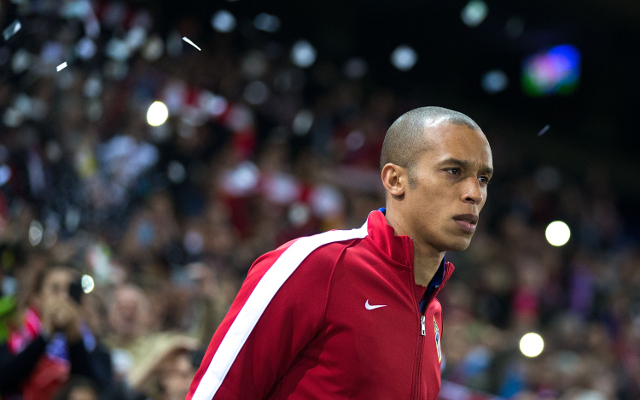 Atletico Madrid defender Miranda has been linked with a summer move to Manchester United, and the centre-back has admitted that he is flattered to be on Louis van Gaal’s transfer wish-list.

The Brazilian has little over a year left on his current contract at the Vicente Calderon Stadium, and the club, according to the Mirror, are prepared to cash in on the 30-year-old rather than offer him a new deal at the end of the season.

The Red Devils boss’ priority in the summer transfer window appears to be on strengthening his defence, and with a deal with Borussia Dortmund captain Mats Hummels having reportedly already been agreed, according to the Express, Miranda would further strengthen their options at the back.

Miranda has revealed that he is aware of the speculation that he is on the radar of the Premier League giants, and is thrilled by the links.

“Of course this news reaches me, and it makes me happy. It shows I am doing well,” he was quoted as saying by the Daily Mail.

Nonetheless, despite feeling honoured by the rumours linking him to Old Trafford, the Brazil international insists he is happy with life at Atletico.

“It makes me proud, but my intention is to stay at Atletico because I still have a year and a half on my contract.”

However, if reports in the Mirror are correct, the defender could be sold in the summer