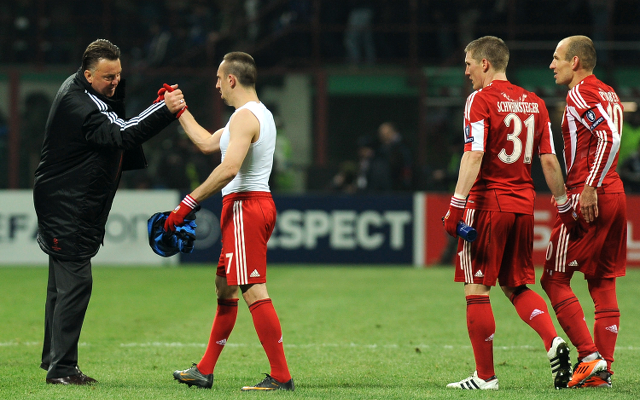 Manchester United manager Louis van Gaal was subjected to another scathing attack this week, this time by former player Frank Ribery as the French star spoke of their thorny relationship, Goal reports.

Ribery worked under the Dutchman for two years, winning the double in 2010 and reaching the Champions League final that same year. However, he wasn’t a big fan of Van Gaal’s man-management skills with the gruff veteran notoriously known for his lack of preferential treatment towards world class players.

Currently enjoying life at Man United, Van Gaal has come under similar criticism from other former players recently after Barcelona legend Hristo Stoichkov labelled him as “scum” (via the Mirror).

“We had problems on a human basis. When he started, nobody knew what was going to happen,” Ribery explained to Goal.

“His idea was that he did not care about names at all, you don’t need stars, everybody had to prove themselves again.

“The first contact with him was already poisoned. As a professional you lose your trust. He does great things on the pitch but the coach Van Gaal was a bad man. Our relationship was crushed.”

Van Gaal has been involved in a number of internal rifts during his managerial career which often led to his various departures, but it seems as though those issues are not yet a problem at Man United.

In his debut season at Old Trafford it appears van Gaal will secure a crucial Champions League berth with a top four finish looking almost sewn up.