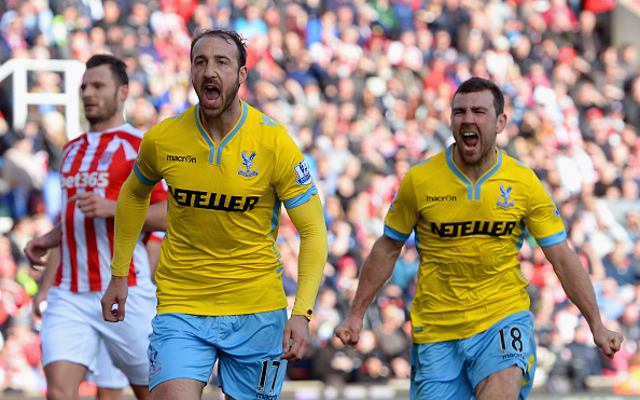 Manchester City will be taking on statistically the most deadly striker in the entire Premier League when they travel to Selhurst Park to take on Crystal Palace this evening.

Somewhat surprisingly, Glenn Murray the best minutes per goal ratio in the league and is ahead of the likes of Chelsea’s Diego Costa, Tottenham golden boy Harry Kane and Manchester City’s own Sergio Aguero.

Kane and Costa have both scored 19 league goals apiece at the top of the scoring charts, but despite that they sit fourth and fifth respectively behind Papiss Cisse and Olivier Giroud.

All of the top three have had circumstances this season curtailing their playing time, with Giroud and Cisse having injury trouble while Murray was out on loan at Reading until January.

Despite that, the Crystal Palace striker has hit four goals in just 364 minutes, giving him a record of scoring a goal every 91 minutes.

The table only takes players who have played more than 300 minutes of football, meaning departed Chelsea winger Andre Schurrle is one of four Blues in the top 10, sneaking in at the bottom having scored every 143.7 minutes.

Chelsea fans are handed a boost looking at the table because, despite Diego Costa’s injury both Dider Drogba and Loic Remy have earned top 10 places, sitting ninth and eighth respectively.

Ex-Stamford Bridge veteran Frank Lampard though, has a better minutes per goal ratio than those two and even sits one place above Sergio Aguero in the table.

The German was slightly unfortunate to be shipped off to Wolfsburg. He was impressive as a bit-part player for Chelsea, but financial fair play necessitated his departure if Mourinho was to bring in Juan Cuadrado in January.