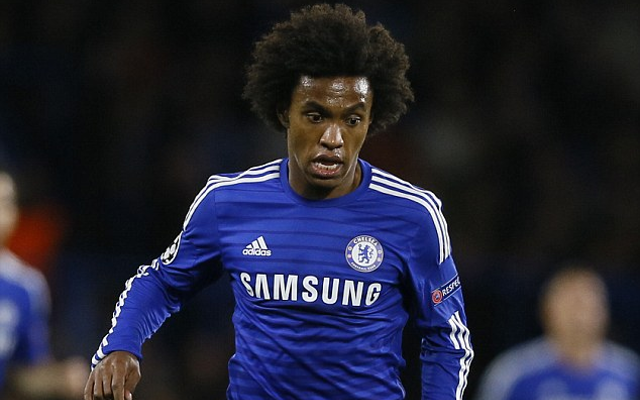 Brazilian winger Willian has revealed how Chelsea manager Jose Mourinho is preparing his side for the coming crucial games against Arsenal and Manchester United, according to The Express.

SEE MORE:
Chelsea have a 97.6% chance of lifting Premier League trophy, while Arsenal are their closest title rivals
Chelsea news
Chelsea may use playmaker as bait in pursuit of £70m rated ‘superstar’

Chelsea currently hold a seven point lead at the top of the Premier League having played a game fewer than their title challengers, and former Anzhi man Willian believes the Portuguese manager gives his players everything.

He said, “He is a great manager and he gives confidence, he gives everything to the players and we try to win all the games.

“He explains what we have to do on the pitch and he is a very good coach and he has history in football so I am very happy to work with him.”

The Blues take on QPR this weekend, in a huge west London derby which has big significance at both ends of the Premier League table. Chelsea are looking to further their status as the champions elect, while the Loftus Road side are fighting for their lives to avoid relegation into the Championship.

Mourinho’s side have not lifted the Premier League trophy in five years, though Willian believes that as long as they keep up their level of performance, they will be champions come May.

“I think we played very well [against Stoke], we have confidence and possession and we have to continue in the same way,” he added.

“We have to continue to be strong and concentrate and we have to get points game by game and this is the way.

“Now we have to stay focused and stay strong because there are difficult games coming and we have to prepare.”