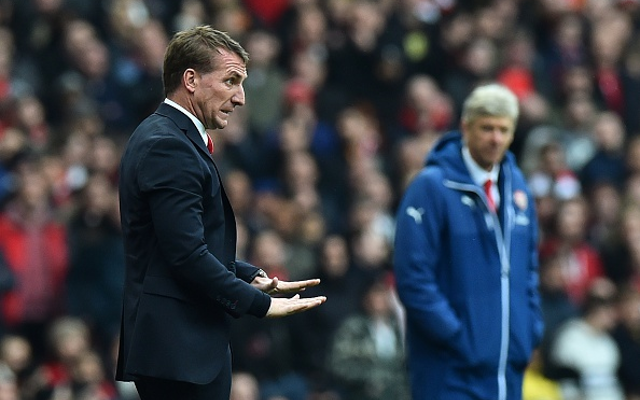 Liverpool boss Brendan Rodgers has admitted that his club still has a way to go if they are to reach the level of rivals Arsenal after the Gunners demonstrated a clear gulf in class between the two sides on Saturday, the Daily Star report.

Arsenal exacted revenge on their top four rivals for last season’s defeat at Anfield and a sensational eight-minute period from the home side ended the game as a contest.

Hector Bellerin, Mesut Ozil and Alexis Sanchez gave Arsenal a 3-0 half-time lead and Rodgers admitted that the world class players available to Wenger shows that his club has some work to do.

“But it is frustrating that we got ourselves in a position over the last three months, very close, to then come up short in the past two games,” Rodgers was quoted as saying in the publication.

“However, I look at Arsenal and their bench, the players, the world-class players on the field with big talent and it shows the continual work we have to do.”

The wealth of options available to both managers was evident, whilst Liverpool struggled without Martin Skrtel and Steve Gerrard, Arsenal could do without Mikel Areta, Jack Wilshere, Mathieu Debuchy and Alex Oxlade-Chamberlain. International stars such as Tomas Rosicky and Theo Walcott didn’t even make an appearance off the bench.

However, there can be no sympathy for Rodgers given his vast financial outlay in the summer, spending well over £100m (via The Guardian) to compensate for the loss of star man Luis Suarez.

The difference betweens the two clubs, as brutal as is sounds, may have been spending and spending wisely.