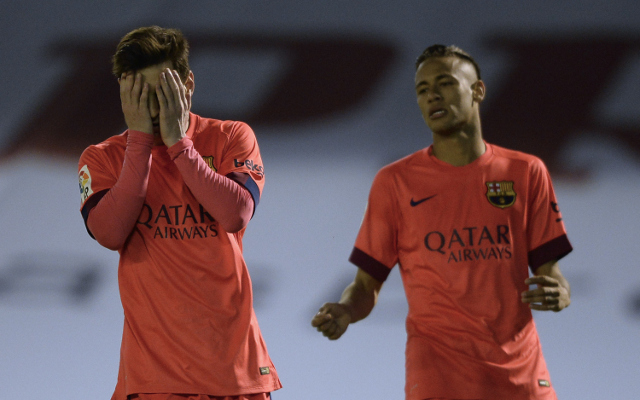 Barcelona manager Luis Enrique has insisted that striker, Neymar was not being punished for his recent goal drought, after the Brazilian was left on the bench for the victory over Almeria.

The 23-year-old had to watch the entire game from the dugout, as Enrique opted for Pedro instead to partner Luis Suarez and Lionel Messi in the front three.

Despite being the best player when Brazil played Chile in the recent friendly at the Emirates, Neymar’s domestic form has led to some criticism. He has just two goals to his name – both in the Copa Del Rey victory over Villarreal at the start of March – in his last eight games in all competitions for the Catalan club.

Lionel Messi handed the home side the lead at the Nou Camp with an exquisite finish just after the half-hour mark, but they had to wait until ten minutes into the second-half to kill the game off.

A brace from Luis Suarez, as well as Marc Bartra’s first goal for the season, sealed the convincing win over the relegation candidates. Nevertheless, the talking point after the game was the omission of Neymar.

According to Sky Sports, Enrique explained the player was being rested following his international exploits, rather than paying the price for a dry spell.

“Neymar is the only one who didn’t get a rest with his national team. So [tonight] I called [up] Pedro, who was in the best possible condition,” he said.