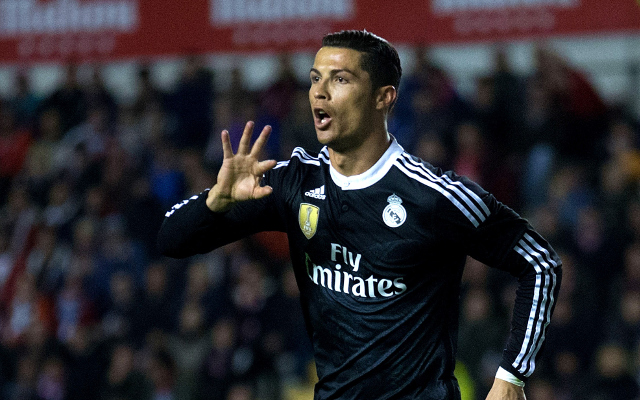 Cristiano Ronaldo scored his 300th goal for Real Madrid on Wednesday night against Rayo Vallecano, but the Portugal captain used his celebration as an opportunity to let out his frustration for being booked for diving earlier in the game – screaming to the officials, “Steal this shit!”.

Despite scoring his 300th for the Spanish giants – the Portuguese was still unhappy with a decision by the referee earlier in the game that saw him booked for diving – and he expressed his frustration, rather distastefully, in his goal celebration.

The following clip shows the 30-year-old wheeling off to celebrate netting his side’s first goal, but on close inspection, he can be seen saying, “¡Roba esto, caralho!” – which in English translates to, “Steal this s**t!”.

Watch the clip below:

Ronaldo’s apparent unhappiness on the pitch in the second-half of the season has been plain to see – and easy for the cameras to pick up on – with the forward performing a number of shocking gestures and outbursts towards officials.

Earlier in March, he told the Real faithful to “go f*** themselves” following whistles from the Santiago Bernabeu faithful, while only a week later, he grabbed his manhood and asked the referee in El Clasico “do you like it?” after being booked for simulation.