Arsene Wenger was delighted with his side after they clinched an eighth straight win in the league after beating second from bottom Burnley at Turf Moor on Saturday evening.

The Gunners lead through a 12th minute strike from Aaron Ramsey and that was enough for them to close the gap on league leaders Chelsea to four points.

With the Manchester derby taking centre stage on Sunday afternoon, it was important that the North London outfit came away with all three points as the race for Champions League qualification heats up with the end of the season fast approaching. 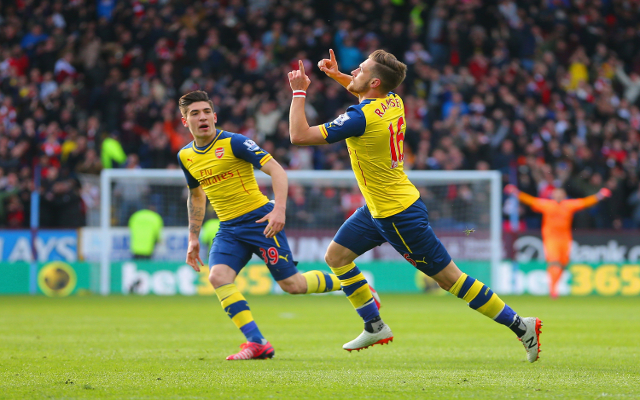 Speaking after the game Wenger highlighted his side’s defensive qualities as an important factor in the win over the relegation candidates:

“I’m pleased with the performance because it was a more fighting performance than a fluent performance.” he told the club’s official website.

“We had to fight, we had to be combative until the end and we couldn’t score the second goal. Our defenders played well today and won us the three points.” he added.

Despite cutting the gap on Chelsea once again, the Frenchman insisted that the situation regarding the title remains the same and that Jose Mourinho side are in control:

“Nothing has changed. Chelsea are still too comfortable. We need a perfect run and we need a non-perfect run from them. We cannot master that, we can only master our attitude. I feel they are still in a comfortable position.” he said.

Another trip to Wembley is next on Wenger’s agenda with Championship side Reading standing between them and another FA Cup final appearance.