Leones Negros and Puebla will face each other in the Liga MX on Saturday night, with the winners taking a big step to avoid relegation to Mexico’s second tier – the Ascenso MX.

One side gets relegated every May in Mexico, with the demoted side being decided by a points-per-game average of the last three seasons.

It means that even though Leones Negros go into the weekend in sixteenth place and Puebla start the weekend in thirteenth, it is almost certain that one of these two sides will face the drop in five weeks time.

A win is more crucial for Puebla than their opponents; Leones Negros were newly-promoted this season, meaning a win for them has a greater bearing on their coefficient that for Puebla.

The hosts have a full squad available, while for the visitors Mauricio Romero and Efrain Cortes are injured and  Francisco Acuna and Jose Rodriguez are doubts.

Here is the bottom of the Tabla de Descenso (relegation table) as it stands: 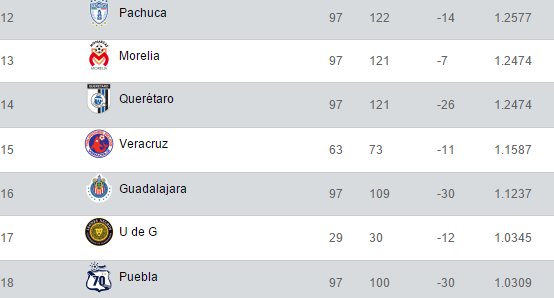