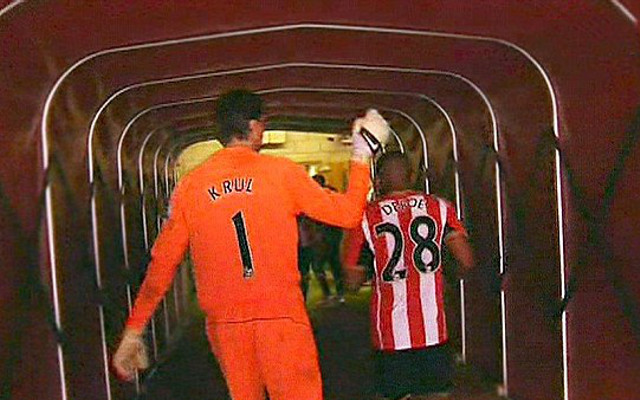 Former Liverpool defender Jamie Carragher has continued his attack on Newcastle United goalkeeper Tim Krul for his antics at half time during the recent derby defeat to Sunderland.

The ex-Reds centre-back feels the Dutchman was wrong to congratulate opponent Jermain Defoe on his goal before the game was over, with Krul clearly seen in the tunnel patting the striker on the back and joking with him.

While Carragher has no issue with players embracing and showing sportsmanship at full time, as he has done himself in his career, he admits he cannot understand why the player felt the need to do it while the game was still in the balance, and could not contemplate doing so himself in such an important match.

Writing in his colum for the Daily Mail, he said: “I’m still struggling to work out why Krul did what he did.

“Coming together with an opponent and smiling after he’s scored against you in a match of such importance? No, I’m sorry. I can’t understand why any player would feel the need to do that. At the end of the game? That’s not an issue — there is no more appropriate place for sportsmanship.

“Think about the iconic image of Pele and Bobby Moore swapping shirts after Brazil had beaten England 1-0 at the 1970 World Cup or how two boxers will embrace after they have gone the distance — that is fantastic to see.

“When Liverpool beat Chelsea in the 2005 Champions League semi-final at Anfield, the first thing I did at the final whistle was go over to see John Terry to offer my respects for how well he’d played over the two legs. Would I have told him that at half-time with the game in the balance? No chance!”

Newcastle ended up losing the game 1-0 to Sunderland, with Defoe’s superb strike proving the difference at the Stadium of Light as the Black Cats claimed the bragging rights.