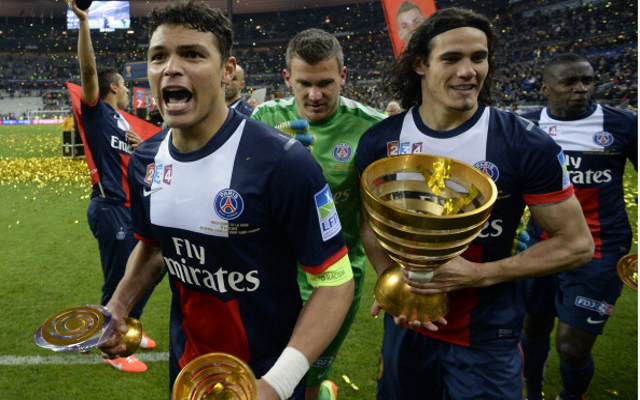 Man United have set their sights on PSG pair Edinson Cavani and Thiago Silva as Louis van Gaal lines up a massive summer bid for the duo according to the Sunday Mirror.

Manchester United FC news.
The Old Trafford side have long been linked with a move for Uruguyan Cavani but interest in Brazilian centre-back Silva is seemingly a recent development.

The Sunday Mirror state the Premier League side will offer £57m for the duo though that doesn’t seem nearly enough considering the pedigree of the two South Americans.

However this source does state that van Gaal would be willing to use the likes of Robin van Persie, Javier Hernandez, Rafael and Nani in part-exchange and as such that may tempt Laurent Blanc into considering such a deal.

Van Persie has struggled with form and fitness this term and Cavani may be considered an ideal replacement for the Dutch veteran.

Silva is a strong central defensive option that would represent a real improvement on the players van Gaal can currently call upon.

With Man United edging closer to a return to Champions League action, a top four spot almost in the bag, van Gaal will look to strengthen his squad for the battle ahead.