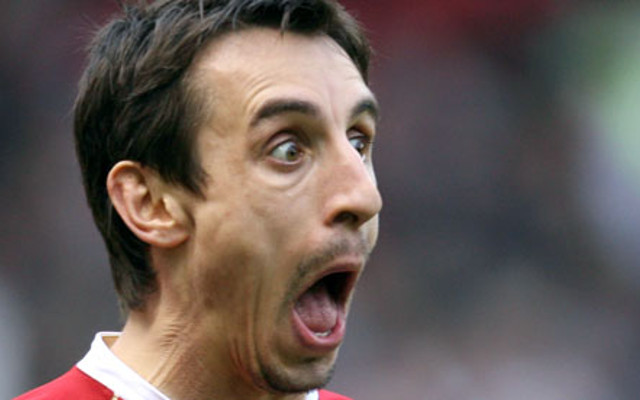 Manchester United legend Gary Neville believes City may still have the slightly better team as the two old rivals meet in the Premier League this weekend.

Writing in his column for the Daily Telegraph, the former Red Devils right-back claimed City still looked the slightly stronger of the two clubs as they look set to battle it out for third place in the table.

United recently moved ahead of City in the rankings after an awful run of form from Manuel Pellegrini’s men, culimating in a shock 2-1 defeat to Crystal Palace this week.

Neville concedes that the reigning Premier League champions have not spent well and that their squad looks in decline, with many of their best players ageing in the same way that he recalls his old side did in the 2009/10 season.

The player-turned-pundit now feels that it won’t be long before United can overtake City if they do not sort of out their transfer strategy.

“Louis van Gaal’s side are an emerging team playing with confidence and United supporters, three weeks after viewing their glass as half-empty, now see it as half-full following significant wins against Tottenham and Liverpool,” he said.

“But City are the reverse, with an ageing team, one which is looking stale both tactically and in terms of personnel, going into the game with big question marks hanging over everybody at the club.

“City cannot escape the fact that they have recruited badly in recent years and it has left them with a team that has grown old. Experience can be a good thing, but it can also be a negative because staleness is an issue.

“I remember walking out for a game against Chelsea at Old Trafford in April 2010 alongside great players such as Edwin van der Sar, Rio Ferdinand, Nemanja Vidic, Paul Scholes and Ryan Giggs.

“But it was probably the only time I didn’t want to be on the pitch with them because the average age of our team that day was 31.

“It was one of those hot spring days, when age hung heavier than experience, and we lost 2-1 to a Chelsea team which went on to win the Double. That United team was coming to the end and City will arrive at Old Trafford with the same clouds on the horizon.

“My gut feeling is that City currently have the better team and squad but unless they take on FFP this summer it will be the red half of Manchester that are next celebrating winning the Premier League title.”