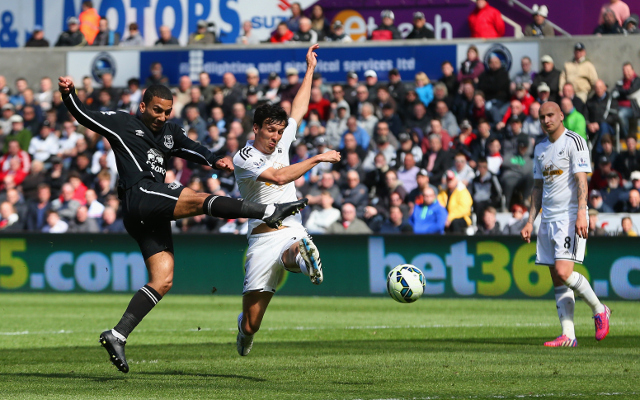 Aaron Lennon took advantage of some slack defending by Swansea’s back line, pouncing on a cross and knocking it past Lukasz Fabianski to give Everton a 1-0 lead at the Liberty Stadium.

Swansea were looking the more likely of the two to score, and threatened Tim Howard’s goal on several occasions. They couldn’t turn their dominance into a lead however, and even saw a fantastic Jonjo Shelvey strike disallowed – arguably the incorrect decision.

They were made to pay for their missed chances just before half time, when the former Tottenham winger found himself unmarked and in acres of space.

Some clever movement and passing from Ross Barkley started the attack, and the visitors worked it out wide into a good crossing position. The ball sailed through a crowd of bodies, before Lennon took it under control and and knocked it into the far corner.

He is looking to revive his career at Goodison park, and looks capable of doing so after scoring his second goal of the season. This game looks like it has more goals in it, so his opener is unlikely to prove the winner.