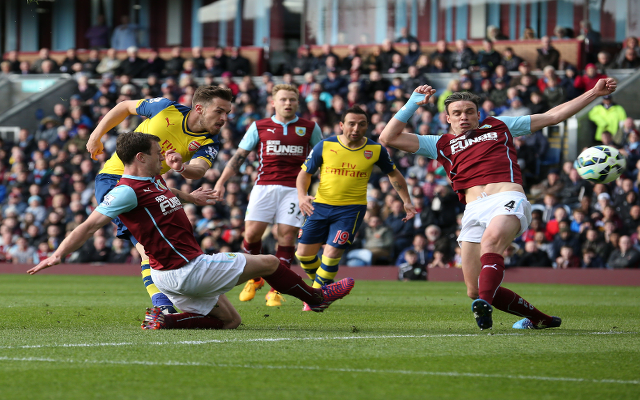 Arsenal midfielder Aaron Ramsey netted on his 150th appearance for the Gunners, as they lead relegation strugglers Burnley 1-0 at Turf Moor in a game which is crucial to their slim title hopes.

After a number of efforts from the likes of Alexis Sanchez and Mesut Ozil, the Welshman smashed the ball into the roof of the net to continue his impressive form.

Should the scores remain like this, Arsenal will move to within four points of league leaders Chelsea, with the Blues to visit the Emirates at the end of this month.

When the teams were announced, many wondered the position Ramsey would occupy – given the number of midfielders named in the XI by Arsene Wenger – but the Welshman was in the same wide-right role he excelled in against Liverpool.

With licence to roam inside, Ramsey is showing that his goal threat isn’t diminished, despite this unfamiliar role. Burnley have had their moments in this game however, and one get’s the feeling that another goal is vital for the visitors.