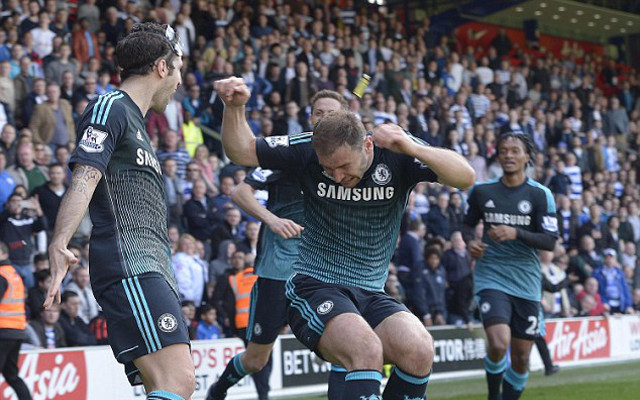 Chelsea defender Branislav Ivanovic was hit by a lighter as he celebrated Cesc Fabregas’ winning goal against QPR, reports the Daily Mail.

The FA are waiting for referee Andre Marriner’s report on the game before deciding whether to investigate crowd control at Loftus Road, with other missiles being thrown on to the pitch throughout the encounter. However, Blues manager Jose Mourinho didn’t seem too bothered by the incident, even joking that players should keep any money thrown at them.

The Portuguese boss said: “The game was correct. Correct on the pitch, correct in the stands. Hopefully correct outside. If somebody throws a pound, put the pound in your pocket and go. If it’s a chocolate, eat it. No problem. It’s not easy, because emotionally it’s a big game for them and us. The referee also helped, a very stable man who solves, not creates, problems in the game.”

The Stamford Bridge outfit beat the Rs 0-1 to extend their lead at the top of the Premier League to seven points. They also have a game in hand on all of the other teams in the top four. However, their next two matches against Manchester United and Arsenal could be key in finishing off the title race.