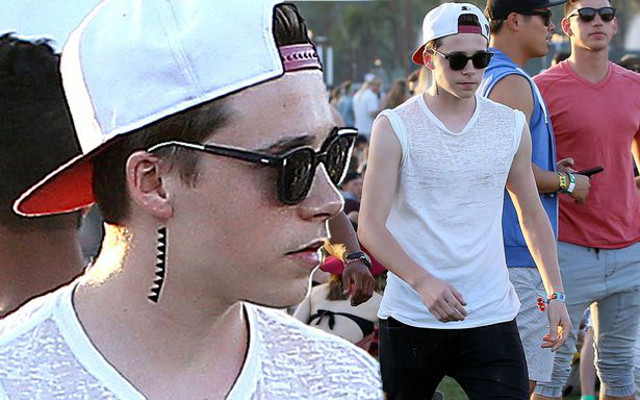 David Beckham’s love of tattoos seems to have rubbed off on his eldest son Brooklyn; after the 16-year-old was spotted sporting a fake tattoo at the music festival Coachella in California over the weekend.

READ MORE:
Spice up your life! Victoria Beckham set to team up with Spice Girls for 20th anniversary tour
(Images) Brooklyn Beckham rocks to AC/DC at Coachella with friends
(Video) David Beckham reveals how he keeps son Brooklyn down to earth

Images, posted by the Daily Mail, showed the youngster with a tattoo – clearly fake – of a chain of triangles on the side of his neck, in what may be the first sign that he could follow in the footsteps of his heavily-inked dad.

Brooklyn has an awful long way to go before catching up with his former Manchester United midfielder dad, but he certainly looks up to the 39-year-old for style tips.

Just like his father, the teen can’t seem to escape the media’s attention – even when his dad isn’t with him – but Brooklyn appears to have settled with ease into the life of a celebrity.