Manchester United continue to mock Liverpool skipper Steven Gerrard and couldn’t help but land a departing blow on the England man as he prepares to leave Anfield for LA Galaxy.

Shirts were being sold outside Old Trafford before the derby against Manchester City, mocking Gerrard’s sending off against the Red Devils last month seconds after entering the pitch for a stamp on Ander Herrera.

‘Gone in 60 seconds’ is the message across the shirt, though amended to take into account the number of seconds Gerrard lasted in the encounter, referring to the Hollywood movie starring Nicholas Cage.

The victory for Man United at Anfield that day has led to the run they’re currently on and will likely see them qualify for the Champions League this time around.

Gerrard still harbours hopes of lifting the FA Cup on his birthday, but will have to lead his side past a jubilant Aston Villa team under the enigmatic Tim Sherwood.

Check out the shirt being sold at Old Trafford today below: 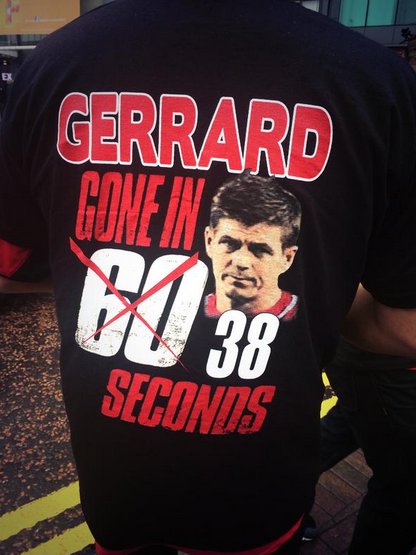