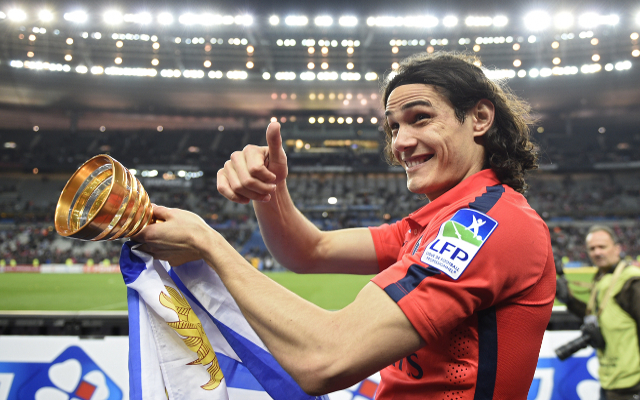 Man United are reportedly in talks to sign long term target Edinson Cavani according to the Metro.

The 28 year old scored twice during PSG’s Cope de la Ligue final win over Bastia on Saturday evening but is seemingly on his way out.

The Parc des Princes striker is also being pursued by Arsenal and Liverpool but the Metro claim Man United lead the chase.

The Ligue 1 side want £55m for the Uruguayan and Louis van Gaal is clearly keen to land the South American with a reported £300k a week contract being offered to the former Napoli man.

Robin van Persie has struggled with form and fitness this term whilst loaned in forward Radamel Falcao has looked a shadow of the player who has been scaring the life out of defenders across Europe for years, and as such one can well see why Louis van Gaal would be keen on Cavani.

The powerful striker has been used in an unfamiliar wide role for much of his time in the French capital but even so his tally of 45 goals in 85 appearances for PSG is a pretty impressive one.