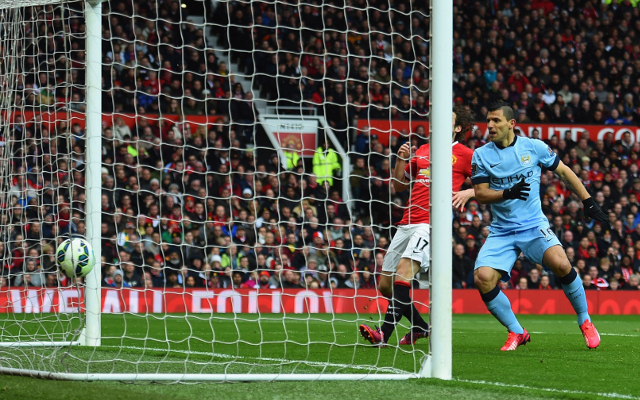 Sergio Aguero gave Manchester City the perfect start at Old Trafford, as they opened the scoring in the derby against United inside the first eight minutes.

The Argentinian had a simple task of tapping in from two yards out after some excellent build-up play from Manuel Pellegrini’s men. Full-back Gael Clichy played James Milner in down the left-hand side. The England international played a wonderful pass with his right foot that bisected the United defence and found playmaker David Silva inside the penalty area.

The Spaniard slid an inch-perfect pass across the six-yard box, and left Aguero with the easiest of jobs.

The goal had been on the cards and United had had an earlier warning when winger Jesus Navas beat a lazy offside-trap from the home defence. He darted into the box, but could only fire his effort straight at goalkeeper David De Gea.

The blue half of Manchester will hoping that this may be the beginning of another victory – having won the last four games against their rivals.

Is this the beginning of another 6-1 perhaps?