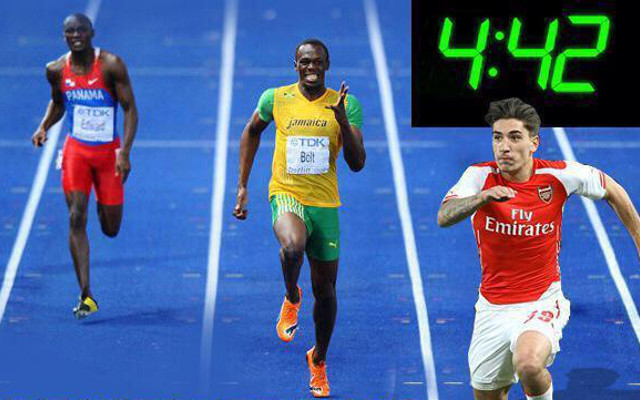 Sprint times have emerged that show Arsenal defender Hector Bellerin to be quicker than Usain Bolt over 40 metres, reports the Metro.

The 20-year-old can reportedly run over 40 metres in just 4.42 seconds, compared to the Olympic 100m and 200m champion’s 4.64 seconds. Were both to race against each other, this would leave the Gunners man a full couple of metres ahead of the sprinter.

While it is unlikely this gap would stay over a full 100m race, it still shows the youngster to be incredibly quick. Although pace isn’t everything, it does mean that the right-back has great recovery speed to make up for mistakes and counter attacks. He can also test defences at the other end.

Bellerin has managed to force his way in to the North London club’s starting XI this season thanks to injuries to Mathieu Debuchy throughout the campaign. He has made 21 appearances so far scoring two goals, one of which was a great strike against Liverpool.