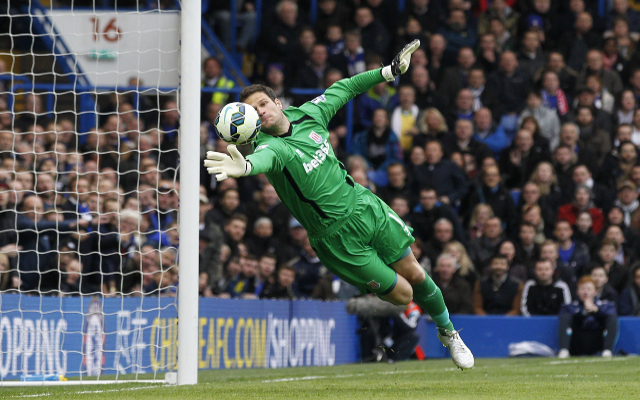 Liverpool have been given a green light to move for Stoke City keeper Asmir Begovic following comments made by the Bosnian international according to the Metro.

The 27 year old is apparently seen by Brendan Rodgers as the ideal man to replace inconsistent keeper Simon Mignolet with the Potters forced into considering offers for their first choice custodian due to his contractual situation.

Begovic has just over a year to run on his current deal and as such this summer may be the last chance for the Potters to cash in on the reliable goalkeeper.

The Britannia Stadium star’s recent comments appear to suggest he is considering his future at the club he joined back in 2010.

‘Every individual wants to play at the highest level possible. You want to challenge yourself.

‘I have been here for a while and helped this club move on. We’ve grown together and hopefully we can keep progressing.’ Begovic added.

The Stoke City man is rightly considered one of the best keepers in the English top tier and is certainly capable of making the ‘step-up’ to representing a side with Champions League aspirations.