Chris Smalling says confidence is flowing in the United squad following their 4-2 victory in the Manchester derby on Sunday and is targeting a top-two finish in the Barclays Premier League.

United ended a run of four straight defeats against their local rivals with an emphatic victory at Old Trafford, with the England defender getting the fourth as he headed in Ashley Young’s free-kick for his fourth goal of the season.

The win has given the Red Devils a four-point cushion over City in third and are closing in on a return to the Champions League next season but Smalling has not given up hope of catching league leaders Chelsea.

Louis van Gaal’s side have won their last six league games in a row and trail the Blues by eight points ahead of the meeting at Stamford Bridge on Saturday, but recent victories in big games including the derby has given Smalling and his teammates added confidence going into the clash.

“It’s massive [to win six in a row]. I think a lot of people probably saw our fixtures as the hardest of the lot.” he told Mail Online.

“But if you play teams like Tottenham and Liverpool and win, they’re real six-pointers. It makes a massive difference, and I think confidence comes from beating these top teams.”

“I think today put us up another step and I think we’re on a roll; we can look up the table and not behind us.” he added. 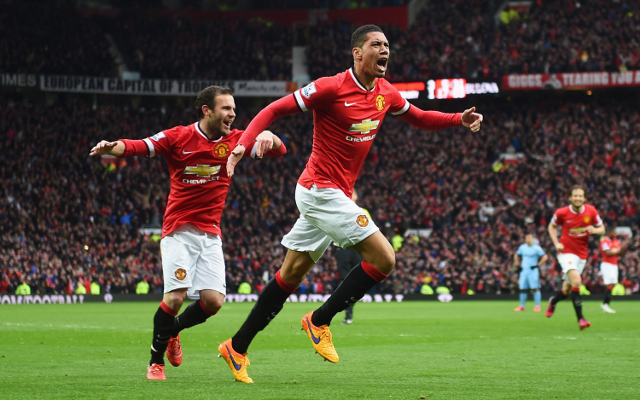 The 25-year-old also revealed wise words at half-time from Ryan Giggs inspired the team to victory at the weekend after falling behind in the eighth minute:

“We weren’t ourselves in the first 15 minutes, but we dominated from there on.”

“We came in at half-time and Giggsy said it was a good show of character to come back from a goal down, but in the second half we needed to get the ball down and take a few more risks.” he said.