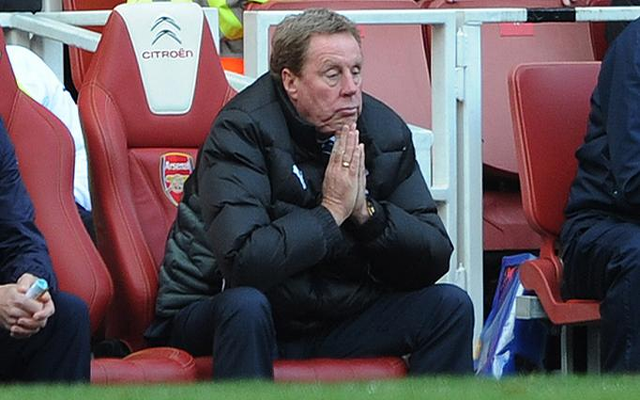 Former Tottenham Hotspur boss Harry Redknapp has revealed that he was attacked by a group of Arsenal fans after last week’s victory against Liverpool outside the Emirates Stadium, the Daily Mail reports.

Redknapp was at the game completing his punditry duties for BT Sport and whilst he admits that he was treated with respect throughout, a minority from a nearby pub pebbled his car with coins and gave him abuse.

Managing Spurs for four years and becoming the first manager from White Hart Lane to beat Arsene Wenger from a period between 1999-2010 inevitably brings a certain level of tension.

“I went to Arsenal and to be honest with you they were fantastic,” Redknapp narrated.

“The people you meet, everyone, I signed autographs and spoke with everybody. I come out and had a couple of pictures in my car with the lads who come over – they were Arsenal fans.

“Suddenly about 15 blokes outside of a pub there go off and I’m stuck in the traffic. They see me and bang, (they start) throwing coins and giving me abuse.”

Spurs are once again set to finish behind their rivals and after overtaking them in February following a 2-1 win at home, they still have a way to go before solidifying their claims of a ‘power shift’ in north London.