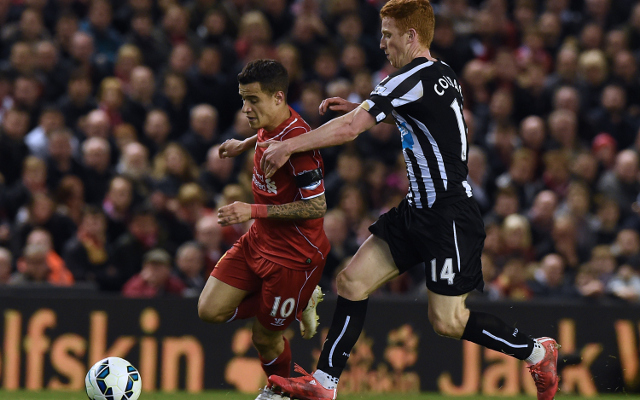 The first half of Liverpool’s Premier League clash with Newcastle may have been made special thanks to the wonderful goal from Raheem Sterling, but it was made spectacular by an incredible bit of skill from Philippe Coutinho.

The Brazilian maestro, who has lit up Anfield with some excellent performances this season, looked like he was heading into trouble. He was running away from the goal, and had four of the Magpies defenders around him. Nevertheless, Coutinho fooled them all with an almost unthinkable piece of skill. He drags the ball back with his right foot, before using his left – practically in the same movement – to back-heel it past the defenders and find a teammate on the edge of the box.

The magical moment summed up the half for the Reds. Raheem Sterling had put them ahead inside the first eight minutes with a great run from the left-hand side into the box. The defenders appeared afraid to touch the winger before he slotted the ball past Tim Krul to give Liverpool the lead.

But, here’s that ridiculous skill from Coutinho: