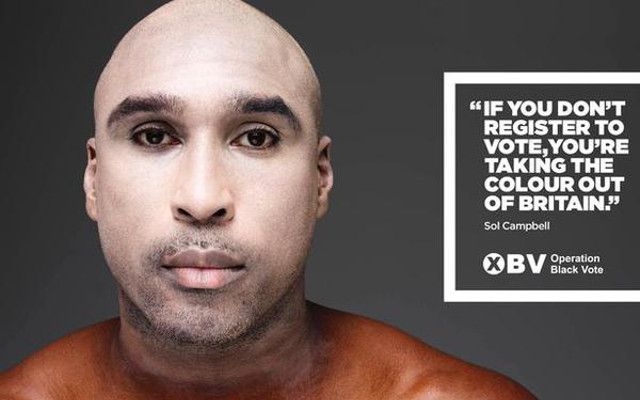 On Wednesday former Arsenal and Tottenham centre-back Sol Campbell released a picture of himself coloured white as part of a campaign to get more black people to vote in the upcoming general election.

The ex-England international has been known for his views on race. He claimed in 2013 to The Guardian that he may have to look abroad for a job as a manager, as he thinks black coaches find it more difficult to get jobs in England. Since retiring from playing he has been earning his coaching badges at the Gunners, but is yet to get a job as a manager.

This is also not the first time that the 40-year-old has got involved with politics. He has said, also in The Guardian, that he is thinking about joining the Conservative Party.

This latest foray in to the political arena hasn’t gone down well in all quarters though, with some Twitter users mocking the former defender…

Sol Campbell turns white to encourage everyone to have their say in General Election #GE2015 http://t.co/bgQB0UaLuz pic.twitter.com/cMUplQKyKx

Sol Campbell “did not murder him” #iRobot pic.twitter.com/lyG21aHjsn

Still can’t get my head around Sol Campbell painting his face white.

*Logs in to twitter* “Sol Campbell turns white for elections” I quit. pic.twitter.com/1hdYfj8T8F

Must have been a good party that Sol Campbell went to. He’s covered in cocaine.

Bloody hell. Somebody somewhere give Sol Campbell something to do.