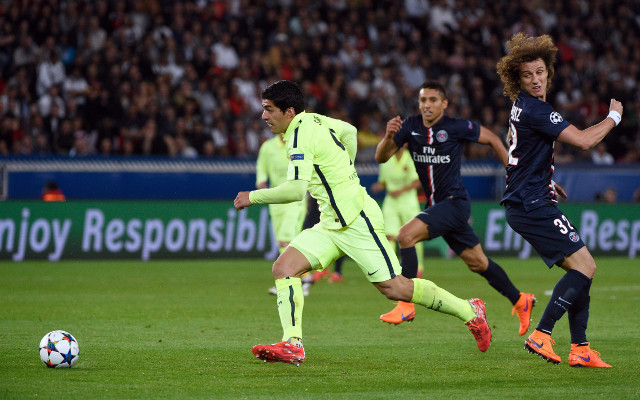 Barcelona beat PSG 3-1 at the Parc des Princes on Wednesday night thanks to goals from Neymar and Luis Suarez. The latter particularly impressed up against former Chelsea man David Luiz.

According to Sky Sports the defender moved to the Ligue 1 champions for £50 million in the summer, making this embarrassing performance even more disappointing. Chelsea fans will be the happiest knowing that they got a great price for the mistake prone defender, who has become infamous for his part in Brazil’s 7-1 loss to Germany in the World Cup semi final.

On both of his goals the Uruguayan nutmegged the 27-year-old, and Luiz looked off the pace for much of the match. He only came on to the pitch after team captain Thiago Silva was injured in the 21st minute, and is on the comeback trail from a hamstring injury.

Twitter tore him apart afterwards, as well as praising his tormentor…

David Luiz was in the FIFA Team of the Year as a defender… Suarez didn’t even make the shortlist!

Looking forward to David Luiz pointing to Luis Suarez at the end to let us know what a great game he’s had.

And Suarez embarrassed David Luiz today, time for a haircut so he doesn’t get embarrassed anymore and can see the ball

The refund joke on David Luiz is boring now He’s well outside the statutory 28 day exchange period and he is far from pristine.