Manchester United playmaker Juan Mata has been in fine form in the second-half of the season, meanwhile his former Chelsea team-mate Oscar has failed to impress this term. This has led to the question: did Jose Mourinho sell the wrong Blues midfielder?

Juan Mata has shone in a Manchester United shirt in recent weeks, as the Spaniard has finally begun to show just why the Red Devils parted with £37.1m to secure his signature, and that he can have a leading role at Old Trafford.

Oscar, on the other hand, has stuttered this season with his impact having become so little that his presence on the field is almost forgotten – despite registering a very respectable seven assists this term.

Mata’s influence, however, has not been unnoticeable recently; the playmaker netted against Manchester City and grabbed a double over rivals Liverpool – including a stunning overhead kick at Anfield. His performances are suggesting that the confidence he played with at Chelsea is returning to his game.

Oulala have released this comparative graphic of the two playmakers showing their impact since January 2014 – when Mata made the move to Manchester United.

The graphic suggests that Jose Mourinho may have sold the wrong Chelsea player – the Spain international has outperformed Oscar in all eight of the key criteria since leaving Stamford Bridge. 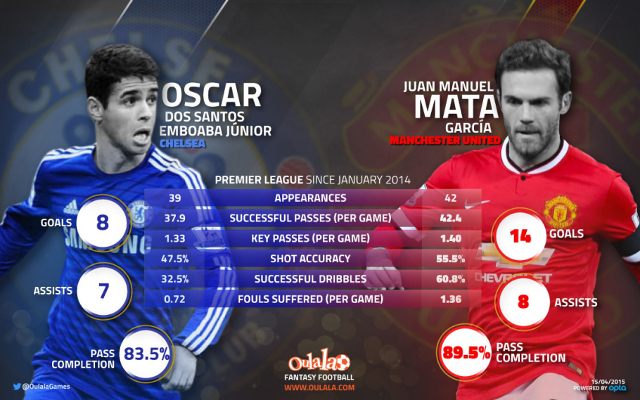 Early in the season, it seemed that Louis van Gaal wasn’t convinced by the talent of the former Blues playmaker as, prior to the festive period, he spent much of his time on the bench.

There has even been speculation that he could even be on his way to Valencia (via the Daily Star) in the summer, but the 26-year-old has been key in Manchester United’s recent excellent run of form, which has seen the club all but secure a place in the Champions League for the next season.

The departure of Mata mid-way through last season should have seen Oscar become Chelsea’s leading player in central midfield, but instead he has become one of the most substituted players in the Premier League, and there are signs that the 23-year-old is far from the finished article.

Moreover, the arrival of Cesc Fabregas from Barcelona has pushed him down the pecking order. We wouldn’t be surprised if the Blues choose to sell in the summer, with the Brazilian having become expendable to the first-team – but more importantly, still likely to command a sizeable transfer fee.

Mata returns to Stamford Bridge for the first time since his transfer to the Red Devils on Saturday, and he will almost certainly receive a huge welcome from his former club.