Brazilian football expert Tim Vickery is confused as to why Chelsea would want to sign Atletico Paranaense youngster Nathan, reports the Daily Star.

The journalist believes that 19-year-old has done little to justify the large fee, having not impressed since playing at Under-17s level. He is also yet to feature for his club’s senior side for a whole 90 minutes, which only makes the move all the more unusual considering the most talented South American players tend to have made a significant impression on the first team in their home country by 17 – Sergio Aguero was just 15 when he made his debut for Independiente, for example – and Jose Mourinho’s first team is already very strong in all areas.

Still, the Blues look set to bring the midfielder to Stamford Bridge regardless, with the Daily Star reporting of a recent flight to London for a medical recently. With the club having over 20 players out on loan at the moment, the Brazilian could well be set for a similar experience if he signs for the Premier League side, with feeder club Vitesse Arnhem an option in the Netherlands. Whether this would be the best thing to do for his development is debatable, but Chelsea have made a strong habit of taking players, developing them and selling them for a profit.

“I think you could see him as a potential first teamer for Vitesse Arnhem in Holland.” 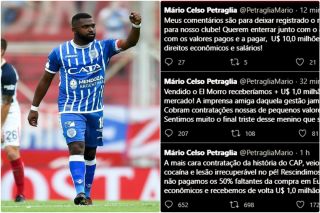