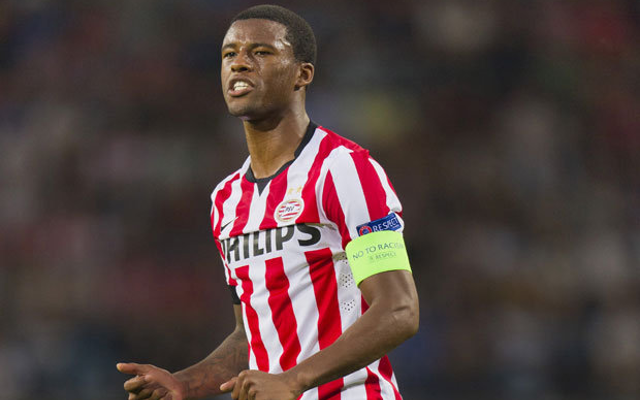 PSV midfielder and rumoured Manchester United transfer target Georginio Wijnaldum has revealed he would be keen on linking up with his former Netherlands manager Louis van Gaal again.

The 24-year-old has been in fine form in the Eredivisie this season, but has been quoted as saying he would like a move to a bigger league at some point in the future, whilst also admitting he would relish the chance to work under van Gaal.

Wijnaldum earned a call-up to the Nertherlands’ World Cup squad at last summer’s tournament in Brazil, scoring in the 3-0 third-place playoff win over the host nation to reward his manager’s faith in him.

United could do with new signings in the middle of the park, and the Dutchman seems to fit the bill perfectly with a good record in providing goals and assists from that position with his current club.

Speaking about his future, the player is quoted in the Manchester Evening News as saying: “I want to play in a stronger league than the Eredivisie.

“With my quality I feel I can bring a lot to a team that I will join. I want to show it in the big leagues; England, Italy, Spain, Germany and France.

“Of course I would like to work with him (van Gaal) again.

“He is a good trainer, and makes players better. I work really fine with him and he is a great man.

“He gave me a chance and opportunity to play in a World Cup after seven months out injured, and I am thankful for that. He helped me get my confidence back.”