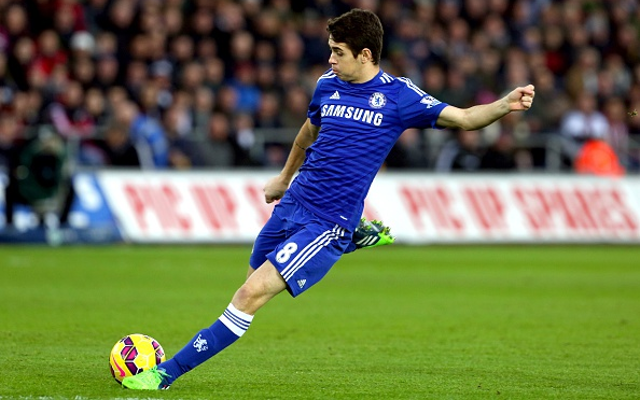 Chelsea forward Oscar has revealed that he’s not thinking about leaving the Blues this summer. His comments come despite speculation linking him with a move to Juventus as part of a move involving Paul Pogba, as well as a potential switch to Liverpool.

The Brazilian was quoted by the Daily Express following further rumours from the Liverpool Echo, who claim that Chelsea boss Jose Mourinho could be prepared to allow the player to leave the London club before the start of next season.

Oscar, 23, has scored 30 goals in 148 games since his near £20m move to Stamford Bridge in 2012 but has fallen out of favour so far this season. However, the player himself is quick to point out that he won’t be forced out of the club.

He said: “I get along with everyone, and the club shows its praise towards me. Chelsea is one of the best clubs in the world, so I don’t see why I would think of leaving.

“I’m very happy with Chelsea’s season so far. I’m happy with my own performances but I do think I could have contributed more to the team.

“There are different tactics depending on the opponent we face and we respect the manager’s choices. Sometimes I ended up not playing the entire match but I’m doing my best to fulfil my role.”

Paris Saint Germain are also interested in the player, who is under contract until 2019. However, Oscar remains confident on securing a first Premier League title as a Chelsea player, with a win over Manchester United this weekend likely to all but secure their first place finish.