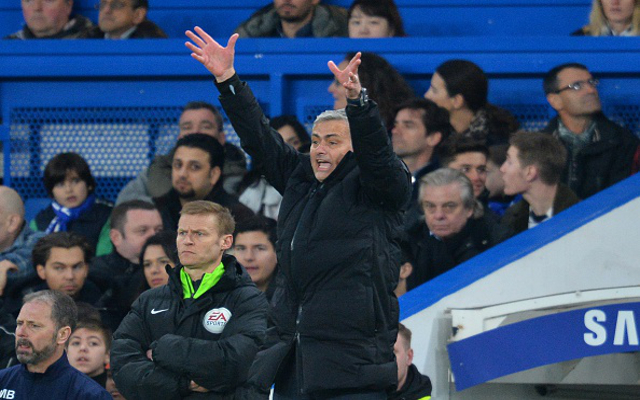 Chelsea manager Jose Mourinho has blasted English media over an alleged dive from Manchester United’s Ander Herrera in their 1-0 win over the Red Devils at Stamford Bridge, which put his side 10 points clear at the top of the Premier League.

The former Athletic Bilbao midfielder was booked late on in the match for simulation after he left his leg in a challenge with Gary Cahill, so as to get caught, and referee Mike dean adjudged him to have dived.

Following Chelsea players having hit the headlines this season for their on pitch controversies, notably when the entire team surrounded the referee in their Champions League last-16 second leg match against Paris Saint-Germain in an attempt to get Zlatan Ibrahimovic sent off, Mourinho chipped into the debate.

The Portuguese boss, quoted on thepeoplesperson.com, said, “I’m happy it’s not a Chelsea player because it would be on Sky as someone’s crimes and cheating.”

Following the result, with six games to go in the Premier League season, Chelsea need to now accrue only nine points in their final six games to win this season’s league title for the first time in five years.