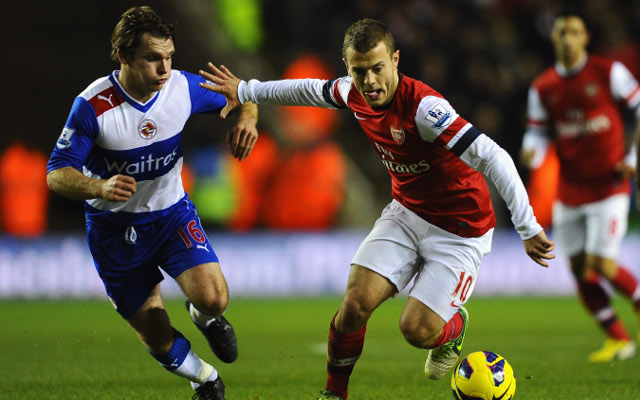 Jack Wilshere will have to wait a little longer for his first Arsenal appearance of the year, after Arsene Wenger decided to include the midfielder on the substitutes’ bench alongside Olivier Giroud for the Gunners’ FA Cup semi-final against Reading at Wembley. Meanwhile, Wojciech Szczesny does start in goal ahead of David Ospina.

Wilshere has not played since limping off ten minutes into the second half during the Gunners’ defeat to Manchester United in November.

Despite the return of the England international, Wenger is without club captain Mikel Arteta for the game, whilst the Daily Mail reported earlier in the week that Alex Oxlade-Chamberlain could miss the rest of the season.

But the Championship side are also missing key players. Nathan Ake and Kwesi Appiah – who are on loan from Chelsea and Crystal Palace respectively – are cup-tied. However, they have been buoyed by the return of Pavel Pogrebnyak, who missed the loss to Bournemouth in midweek.

Steve Clarke will also be looking towards winger Hal Robson-Kanu for a good performance. The Welsh international was released by Arsenal when he was just 15.

Here are the teams in full for the first of the weekend’s semi-finals:

TEAM NEWS: Here is how the Royals will line up for this afternoon’s FA Cup Semi-Final with @Arsenal pic.twitter.com/F6BV57Qg31