As Reading and Arsenal prepare to do battle in the FA Cup semi-final at Wembley on Saturday evening, minds go back to their last meeting in a cup competition in October 2012 when there was a 12-goal thriller.

The home side raced into a three-goal lead after just 20 minutes of the League cup fourth round tie at the Madejski Stadium and found themselves winning 4-0 as the end of the first half approached.

But Theo Walcott pulled one back on the stroke of half-time and gave the Gunners hope then Olivier Giroud and Laurent Koscielny headed in to make it 4-3 and with seconds remaining the former scrambled home a dramtaic equaliser to send the game into extra-time.

Marouane Chamakh and Pavel Pogrebnyak traded goals, leaving the score at 5-5 and it looked destined that this crazy game would be decided on penalties until Walcott completed his hat-trick and Chamakh wrapped up the game with an lobbed effort.

Many of those Arsenal players who featured in that thriller have moved on to pastures new, while some remain: 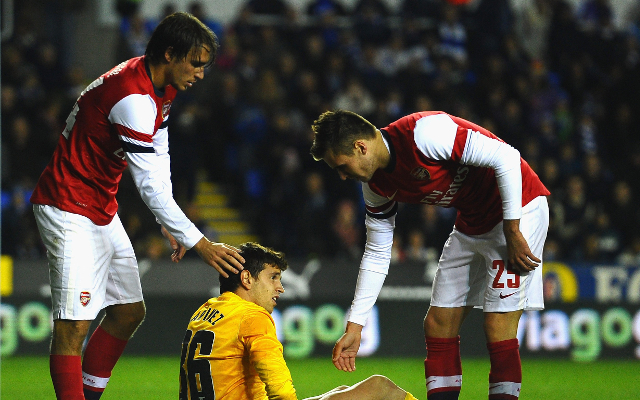 The Argentine had a nightmare first-half on that night as he somehow let one weak effort slip through his hands and into his own net.

He remains with the Gunners as the third-choice keeper and is currently out on loan with Rotherham United.

The boyhood Arsenal fan thought it was him that had scored the equaliser in normal time, only to find out the ball had already crossed the line via Walcott.

Currently on loan at West Ham United and is having a very good season.

Once looked a promising centre-back option for the Gunners, but this game signaled the end of his career in North London.

Did not play again for the club following the win and is now playing his football in Germany with Hamburg.

Only member of the back-four that started that night to be a regular in the team in the present day.

Strange to think the he was the third-choice centre-back at that stage of the season and has developed into a top class defender.

Only played once for the club following a horror show at left-back for the young Spaniard and was shipped out on loan to Leicester City the following season and is now at Norwich City.