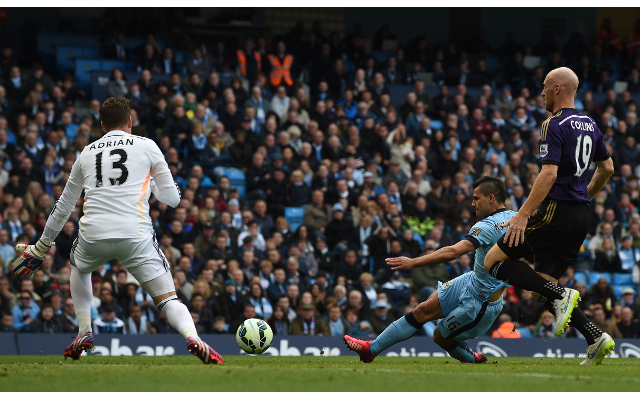 Sergio Aguero scored his 20th Premier League goal of the season to double Manchester City’s lead over West Ham at the Etihad.

The goal came after Hammers winger Stewart Downing lost possession attempting a pass to Mark Noble in the middle of the park. Yaya Toure’s interception allowed the Argentinian striker to lead a viscously fast counter-attack.

David Silva peeled off to the left, and Navas – who got the assist for the first goal – moved to the right, splitting the defence. It was Navas who Aguero decided to slide in, but the run of the other Spaniard appeared to take one of the defenders with him, leaving just James Collins to deal with the striker in the middle.

Navas managed to return the pass back to Aguero before the Welshman caught up with him, and he took advantage, sliding the ball past Adrian to double Manuel Pellegrini’s men’s lead going into half-time.

They had gone in front thanks to a comical own goal from Collins, who looped a cross from Navas over his goalkeeper earlier in the first-half.