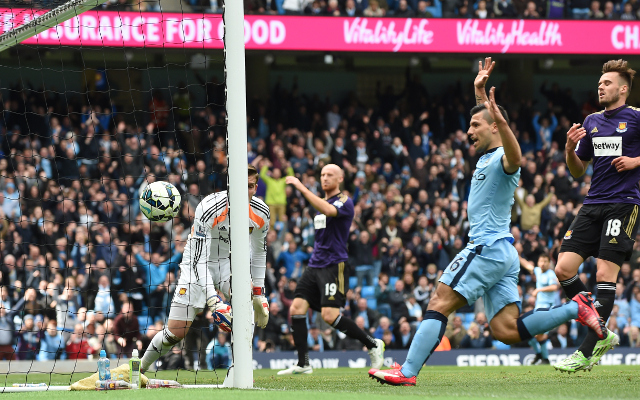 Manchester City were gifted the perfect start to their Premier League clash with West Ham United on Sunday, when Hammers defender James Collins lobbed his own goalkeeper with an unfortunately sumptuous volley.

The goal stemmed from a terrible goal-kick from Adrian, which fell to winger Jesus Navas. The Spaniard darted down the right-hand side, before attempting to bend a cross behind the back line to find Sergio Aguero. The cross failed to make it past Collins however, but the Welshman decided to help it on its way. The centre-back appeared to just flick the ball, nevertheless, it looped right over his keeper, before clipping the bar and agonisingly bouncing across the line.

Manuel Pellegrini’s men made all the early running at the Etihad, and came close on a couple of occasions before the opener in the 17th minute. Playmaker David Silva had an effort blocked, whilst Aleksandar Kolarov hit an excellent free-kick which narrowly curled past the post. Meanwhile, West Ham were restricted to counter attacking as City penned them deeper and deeper into their own half.