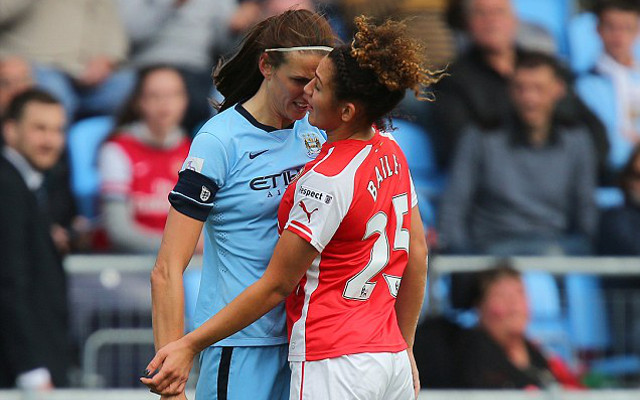 Manchester City midfielder Jill Scott was sent off for a headbutt on Arsenal defender Jade Bailey in Sunday’s defeat to the Gunners in a Women’s Super League One fixture.

The England international took exception to what seemed like a fair and innocuous challenge from Bailey, and the two became embroiled in a heated exchange.

With a wealth of experience in women’s football, it’s surprising that the tough midfielder lost her cool on the pitch, and she will be a huge loss to the Sky Blues.

The clash between the pair only lasted a matter of seconds, before Scott was quickly shown a red card by the referee and sped off the pitch to the dressing room.

Have a look at the moment below:

The 28-year-old later tweeted how disappointed she was with herself following the game:

Gr8 effort from all the girls, I want to apologise for the incident which led to me being sent off, gutted to let every1 @MCWFC down today

The WSL only kicked off on March 25, but Scott’s heated exchange isn’t the first to happen this season – in what isn’t the best of adverts for the women’s game thus far.

Just three weeks ago England and Manchester City goalkeeper Karen Bardsley was handed a three-match ban by the FA for violent conduct after she threw a punch at Birmingham City forward Freda Ayisi.