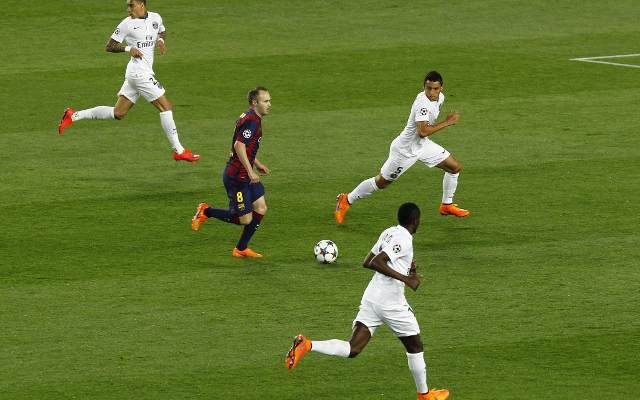 Andres Iniesta dribbled effortlessly through a hapless Paris Saint-Germain team and set Neymar up with a beautifully crafted pass for Barcelona’s first goal at the Camp Nou in the Champions League quarter-final on Tuesday night.

Despite being replaced at half-time by Xavi, likely out of precaution after he picked up an injury at the Parc des Princes in the first-leg, the Spaniard put in an outstanding first half performance.

There has been a great deal of question marks raised over the form of the 30-year-old this season, but Tuesday night’s Champions League masterclass will have silenced almost all of his critics.

How good is that? Iniesta at his sublime best. Neymar exquisite in his finishing.

Messi/Suarez/Neymar get all the headlines, but Iniesta just showed yet again why he’s quietly been one of the greatest players in history.

Andres Iniesta has now registered 4 assists in the Champions League this season, no player has more. pic.twitter.com/cHOuz2UZ6z

Iniesta is balling like he overheard a Madridista comparing him to Isco.

Just beautiful from Iniesta. A magician, an artist.

Iniesta is the best playmaker I’ve ever seen.

That assist for Neymar’s goal is Iniesta’s entire career in about 10 seconds. Absolutely sensational player, one of my all time favourites.

No assists, you say? How about that then? Great response by Iniesta to recent criticism…

That was a bit special. #PSG weren’t actually a defensive disaster. Iniesta is so world class. He shouldn’t have to pay taxes. Ever #Barca

Just beautiful from Iniesta. A magician, an artist.