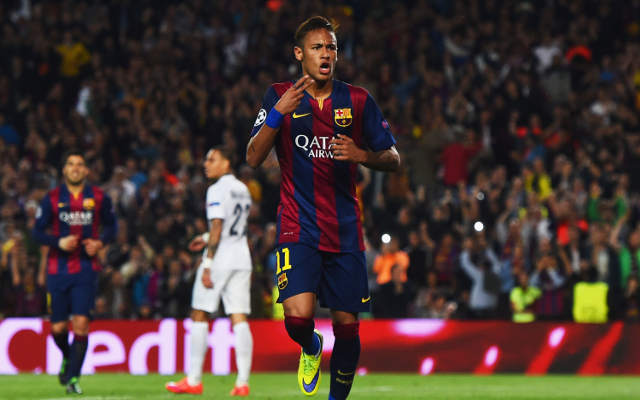 Neymar’s two goals against Paris Saint-Germain in the second leg of Champions League quarter-final tie not only had Barcelona in cruise control it also marked the Brazilian’s 30th of an outstanding season.

After opening the scoring at the Parc des Princes stadium last week, he repeated the trick again after just 14 minutes at the Cam Nou as he latched on to a superb pass from Andres Iniesta to round Salvatore Sirigu and convert into an empty net and give the La Liga leaders 4-1 lead on aggregate.

Then just after the half hour mark he headed home a Dani Alves cross to make it 2-0 and seal the passage into the semi-finals for the Catalan giants.

The goal also marks the 95th of the season between the attacking trio of Lionel Messi and Luis Suarez meaning another five in this campaign will see them equal the record set between Messi, Thierry Henry and Samuel Eto’o in 2009.

Take a look at how Twitter has reacted to Neymar’s performance in the Camp Nou:

Neymar has been a top 3 player this season. What a player

I also feel an idiot for ever doubting Neymar. I didn’t think he’d cut it at the top level, but he goes above and beyond that. Player.

No other player has scored more goals against Paris in #UCL history than Neymar. pic.twitter.com/6rpjMY6p7j