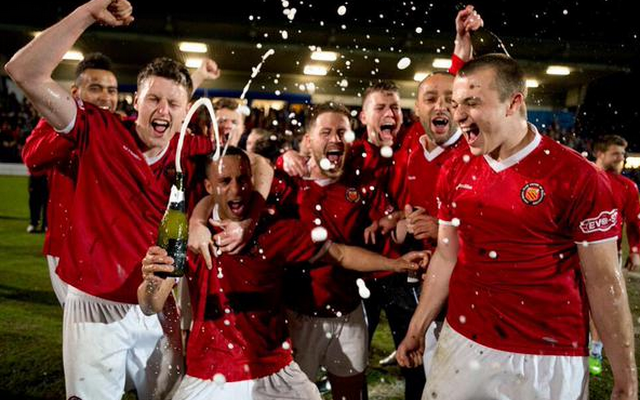 FC United will be playing in the Conference North for the 2015/16 campaign, after securing their fourth promotion since they were founded just 10 years ago.

Greg Daniels headed the winner over Stourbridge in a narrow 1-0 victory, in front of 3,588 home supporters, that sealed their Evo-Stik Premier Division triumph.

The club are now just two leagues below the Football League – and boss Karl Marginson believes that they can eventually reach that level.

He is quoted by BBC Sport as saying: “The Football League is possible. Most clubs would give anything to have the size of support we have.

“There will be obstacles to overcome but we have proved to be capable of that over the last 10 years.”

The promotion caps off an inspiring tenth anniversary for the non-league outfit. It comes a month before they are set to take part in a mouth-watering friendly fixture with Portuguese giants SL Benfica on May 29th – in celebration of their tenth year and their new purpose-built stadium being opened.

Meanwhile, Salford City have taken FC United’s place in the Evo-Stik Premier League, as they have been crowned Evo-Stik North champions.

Neville tweeted his happiness and thanks to the club following their title success:

Well done to all our Committee , Fans, managers , players @SalfordCityFC . Big thanks to all the teams who have welcomed us! Party Saturday