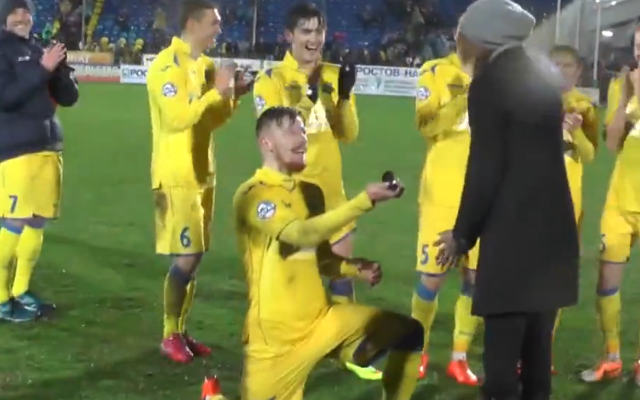 Four victories on the bounce left one Russian footballer in such a buoyant mood that he decided there was no better time or place to propose to his girlfriend – now fiancee – than on his side’s beaming pitch.

Ivan Novoseltsev, who plays for Russian Premier League outfit FC Rostov, got down on one knee at full-time after his team’s victory over Torpedo Moscow on Monday night, the Daily Mail report.

Much to the surprise of his partner Katerina Keyru, a professional basketball player, she was welcomed on to the pitch to share a moment with her boyfriend – and FC Rostov – that she’ll never forget.

The defender picked one of the most nerve wracking moments to propose; in front of hundreds in the crowd, his team-mates and a camera, but fortunately for the 23-year-old – the answer seems to be a yes!

Take a look at the soppy moment below…