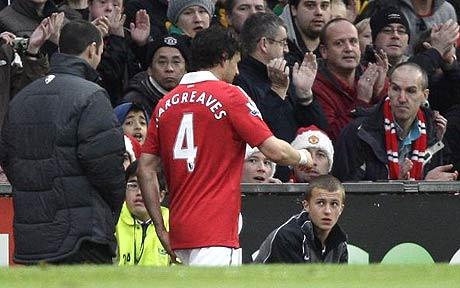 Former Manchester United midfielder Owen Hargreaves has reportedly agreed to play for the club again, four years after leaving the club under a cloud by claiming he was their “guinea pig”.

The Manchester Evening News reports that the retired 34-year-old will pull on the famous jersey one more time in a Legends XI clash with another of his old sides, Bayern Munich.

Yet Hargreaves risks receiving a hot reception from the Old Trafford faithful on June 14, having launched an astonishing attack on the Red Devils when he left in 2011, before joining bitter rivals Man City on a free transfer.

He went on the offensive over criticism of his injury record, which led the ex-England international to compare himself to a guinea pig, and his decision to sign for the club’s neighbours is sure to have further alienated United supporters.

Hargreaves continued to suffer fitness setbacks and he made only four appearances for the Blues before retiring after a brief stint with Queens Park Rangers, for whom he trained but did not play.